Bridge piece and runner board removal

The two rear runner boards are to be removed next. This is going to be a little hard to explain because both of mine are quite badly damaged.


There is also the fact that the trim is missing and this is important, because on the outer edge there are bolts actually attached to the trim that hold the runner boards in place. Because it has obviously broken off, mine have been replaced at some point in its life by non-factory 10mm nuts and bolts.

It will be much more of an advantage to show how these are properly attached when it comes to re-fitting during the build process. Here is how it looks on mine at the rear. This bolt needs to be removed. 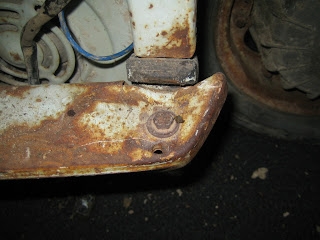 The outer bolt (lowest in pic) also needs to be removed, along with the nut passing through the bridge piece at the top edge of the photo. 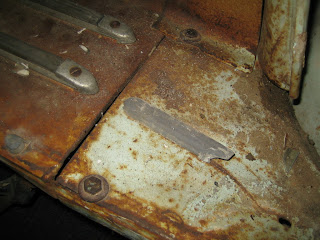 The bridge piece is normally fitted using two dome head, slotted bolts that sit in cup washers. Obviously at some point, mine have been changed. I will specify the correct ones when re-building. 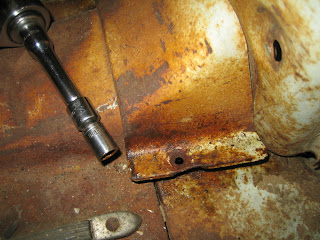 Once removed, you can see the rear outrigger 'dog leg' with the original rubber side panel buffer still in place. Later scooters had a clip on version of the buffer, but here we see it is a single piece. This buffer acts as a block that pushes against the side panels when fitted to force them to 'bow' a little. This helps to stop them vibrating but more importantly, pulls in the edges slightly, to prevent them from coming off.

You can cut these off if they are as badly worn as mine. It serves no purpose leaving them in this condition. As they are perished anyway, they would only tear when we try to remove them in order to have the frame prepared for paint. 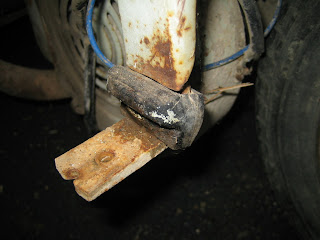 And the front edge, without the running board shows some of the original pale blue/grey paint. 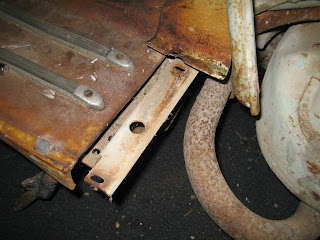 Scooter is starting to look like a skeleton. Pictures like this are good for reference when re-building. 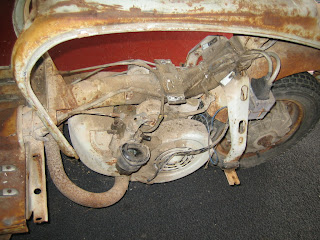 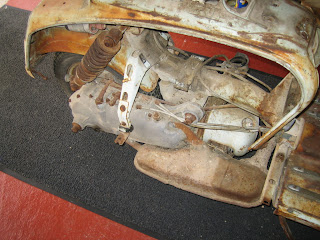 I spent a little time cleaning up the frame here with a soft wire brush so you can clearly see where the factory guys put all the clips, loom and buffers etc.

Again, do not remove any of the cables or wiring loom at this stage. we will need to make proper notes of the position of everything at an appropriate time, later in the strip-down process. 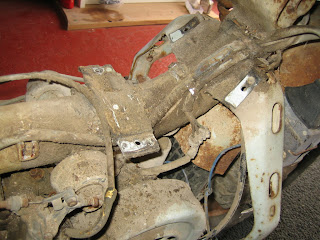