This Lambretta would have originally left the factory with a single saddle type seat positioned at the front for the driver. The seat fitted now is a replacement seat that the original purchaser would have had fitted as an optional extra when new. There is no badge, which is not uncommon, at the rear of the seat and there is no stamped logo on the frame cross member underneath.
Most seats of this type have a push release system to raise and lock down. By pushing on the rear of the seat, in the centre of the back panel, you should be able to release the catch holding it in position. You should now be able to lift the site up and forward.
If this mechanism on your scooter is seized, then you will have to cut away the seat cover to get access. If your seat cover is as bad as mine, that is no great loss. 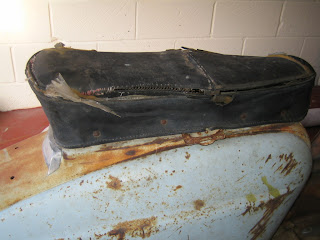 Here you can see the 'push rod', with the button uppermost that you would be pressing on to release the seat from the catch plate on the frame. It is pretty clear from this image how that works. 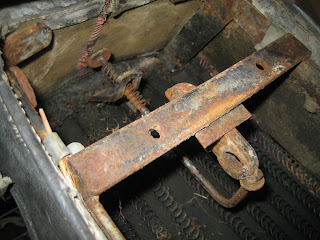 With the seat in the upright position, we can remove the rear catch plate. Mine has two nuts and bolts holding it in place, some have 4.
These are 2 x 14mm x 27mm with a flat washer under the bolt head and under the nut on the underside. 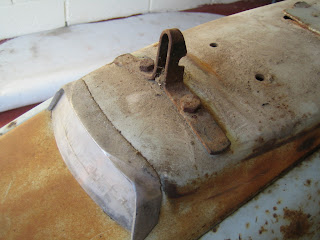 This view shows the location on the underside of the frame canopy. The one on the left is easier to get at because the one on the kickstart side normally has the coil in position, making access a little tricky. 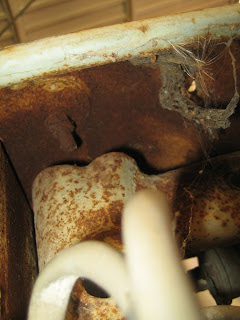 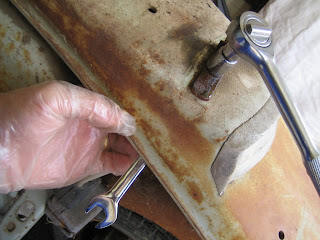 Next, remove the front, hinged section of the seat. This is held in place by:
4 x 14mm x 27mm (flat washer under nut and bolt head)
This image shows the location of the bolts, although as you can see, one of mine is missing. 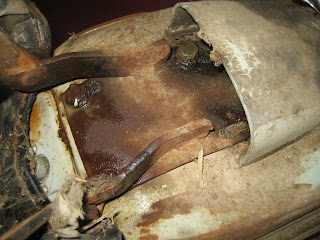 Access to the bolts is gained via the inside of the toolbox. Again, you can see that the bolt toward the rear is missing and one has been replaced with a much later 'nylock' type nut. 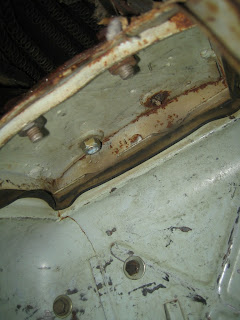 And once all the bolts are out, the seat can be removed. 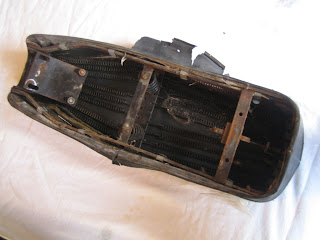 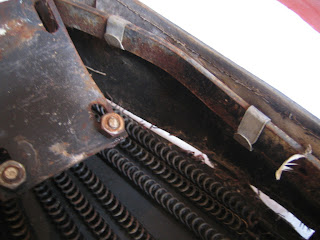 With the cover off, I can see this frame is not in too bad condition. If yours is like this, you can have the whole thing blasted clean exactly as it is and then either powder coated black or even painted if you want a more accurate restoration look. If your springs or any parts of the seat are either damaged or rusted through, they will need to be removed and replaced. All the parts are readily available. This seat will be totally stripped before painting. No particularly special tools are required to take the seat apart. Take a picture of your seat in this condition and save it. You'll need it to remind you where all the springs went. 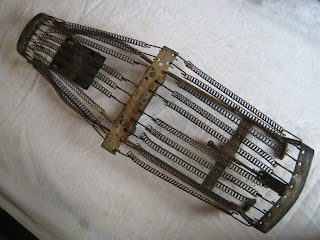 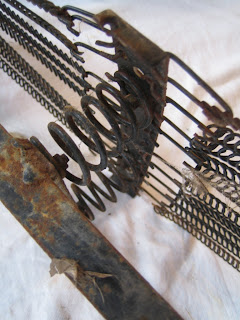 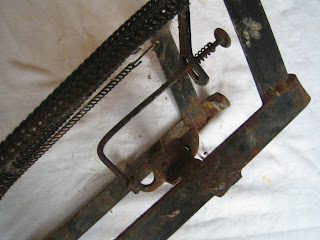