In order to remove everything from the frame, it is necessary to take of the carburetor so that the choke mechanism can be removed later. The carb is held on the engine manifold via a ring clamp bolted around the rear of the carb. The bolt to loosen this clamp can be seen below. 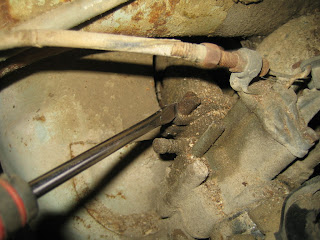 The throttle cable passes through a lever at the rear of the carb with a curled claw. Simply push the throttle lever arm inward (toward the front of the scooter) and release the cable ball end. Cut the ball end off of the cable using wire cutters and pull out the throttle cable from the adjuster housing. Leave the throttle cable where it is for the time being though. You can use it for reference, as a guide when re-routing the new cable, during the build stages. 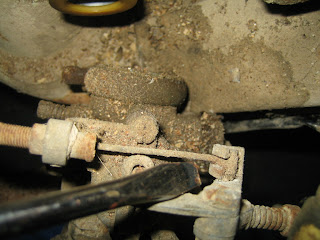 The choke cable passes through this housing (below). You can remove the whole of the housing section by undoing it with a 10mm spanner just above the point of my screwdriver. 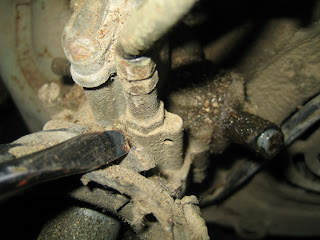 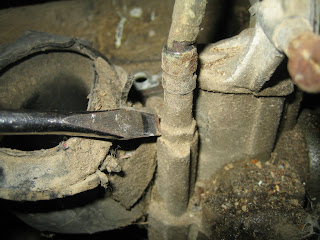 Use care when undoing this. If it is very tight, cut the choke cable instead and then use heat and penetrating oil to make life easier with the carb off the scooter and on a bench. 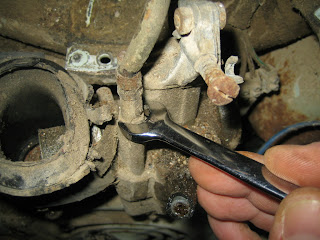 Once it is loose, just pull out the entire choke mechanism like so: 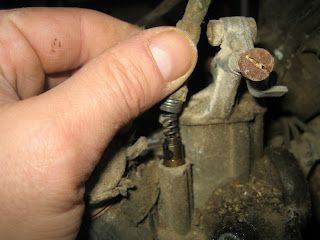 Your carburettor can now be removed from the engine.

There is no reason why, if you spend a few hours (in comfort), cleaning your carb, that it cannot be re-used. It should be a Dellorto unit as on this 125cc Li. You will need to get a new filter for it as well as a new gasket set. All of them are still available from the manufacturer and you can order from the Dellorto web site. Depending upon the condition of the jets etc., within your carb, you may also need to order replacements for these too.

You will find an EXCELLENT resource for stripping and re-furbing your carb here:
http://www.ilambretta.co.uk/carb.html
Posted by Paul Slack on Sunday, August 23, 2020 No comments: