Over the years, it would seem to be accepted whilst fitting tanks at the factory, the installation would most likely be done by one person. Evidence of this is that generally speaking, the bolts through the tanks straps, which hold it in place, always appear to have been done by somebody who is "handed". by this, I mean the bolts go one way on one side of the scooter and alternate on the other. Indicating the fitter was either left or right handed and did both sides.

These bolts can vary from scooter to scooter but are always generally in a similar location from either across the top of the tank or down the sides. But the kickstart side is always toward the front of the scooter and the flywheel side toward the rear.

This is looking from the kickstart side of the scooter. You can see the fitter has installed the tank strap and bolt going upward, almost central to the front of the tank. This long threaded bolt travels through two trunions. The first has a wider hole that the bolt simply passes through, acting as a kind of guide, the second is threaded. Both trunnions are held in place by the rings on the end of the tank straps. The nut passes through the first and tightens on the second (furthest away from the bolt head) and thus, turning the bolt will close and tighten the tank strap. This and the other side need to be removed. 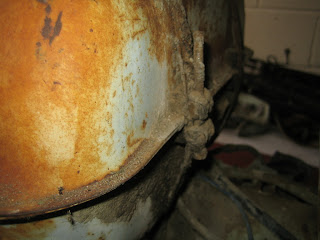 Still on the kickstart side, the tank strap passes through the slot in the legshield outrigger and down below the tray for the tank to sit on. Between the outrigger and tray are two rubber buffers on each side that prevent the tank from being tightened metal to metal and reduce rattles/vibration. There is a further, slotted rubber buffer on the front and rear edge of the tank 'lip'. Exactly the same applies on the other side of the tank. 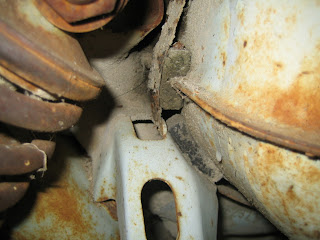 These bolts appear to be coated on years of grime, but believe it or not, they came off really easily.

This is the bolt at the rear of the tank on the flywheel side. You can clearly see the position it was originally fitted in. 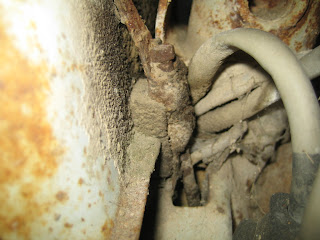 Plenty of penetrating oil and a bit of patience. These are very long bolts. You'll find out why when it comes to fitting new ones as we re-build the scooter. 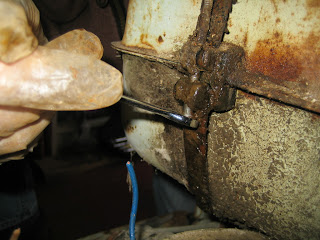 Same applies to the other side. Take your time not to damage the bolt head. It's difficult to get any grinder in there if you break them off. 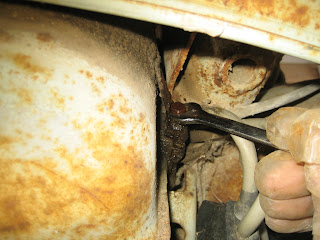 Once the two tank strap bolts are out, you can uncouple the petrol tap rod from the universal joint to the petrol lever rod. There is a soft split pin which needs to be extracted using pliers. Now (ensuring the tank is either empty, or the tap is in the OFF position) remove the rubber petrol pipe from below the tap. See image below. 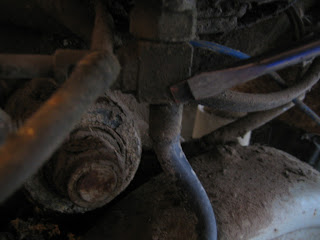 Now, the tank is free. Sorry for the poor image below, but I think you can still just see the coupling joint is separated and ready for removal. 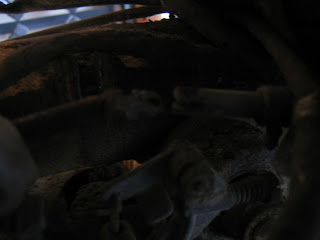 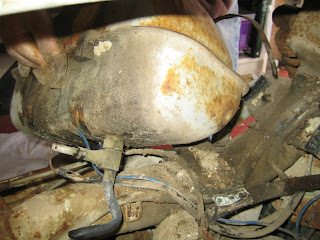 Once out, you can see the wiring loom has been passed UNDER the tank but NOT through the outrigger hole, which is a common mistake some restorers often make. You can also see it is held there by TWO alloy retaining straps above and below the outrigger before it passes UNDER the tank tray traveling toward the front of the scooter.

You can also see the position of the rubber blocks that were under the tank, although one of them is missing because it had glued itself to the tank. 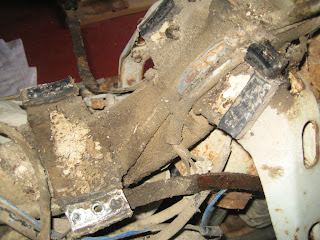 Remove the tap from the tank by simply undoing the bolt at the base. 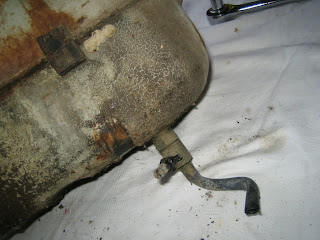 Remove all the rubber buffers from the tank and the frame. They will have to be replaced and new ones are readily available.

The pic below shows the make up of the original rubber buffers with pegs for location on the frame. 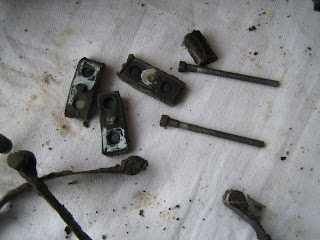